King Island, located in Bass Strait between Victoria and Mainland Tasmania, with a population of around 1500 people has become the focus of devoted travelling golfers from Australia and around the World.

Cape Wickham Golf Links, on the northern tip of King Island (designed by Mike DeVries and Darius Oliver) is not only laid out across some of the best links land available outside of the UK and Ireland but is located on what is surely some of the most visually spectacular golf land in the world! You may have heard it referenced to as ‘Australia’s answer to Pebble Beach’ and the comparisons are understandable (though Cape Wickham arguably has more high-quality holes than Pebble). It is currently Ranked #3 in Australia and #24 in the World.

And as if one amazing course on the island wasn’t enough, Graeme Grant’s Ocean Dunes, situated just a few minutes outside of the island’s main town of Currie midway down the west coast, opened a year or so later, but has also received rave reviews from critics and travelling golfers alike. Entering the Australian rankings for the first time in 2018 and debuting at #10 probably tells you all you need to know. Also set on some spectacular links land, the holes have been magnificently designed to flow seamlessly across the ocean’s edges before turning inland, travelling up and down through the natural dunes in a manner that would have you assume that this is how Mother Nature had always intended things to be!

Many will say there is no use having the subjective debate over which of the two courses is better, however the reality is that most passionate golfers won’t be able to resist the topic. Nevertheless, we are confident there will be no clear winner on the matter – which is a testament to how good both of these golf courses are!

The Golf Travel Agency are specialists in organising golf travel to King Island and have been working in King Island since Cape Wickham first opened, which means we know all the ‘tricks of the trade’ to ensure you maximise your golf experience on the Island.

We offer the option of flying Commercial Airlines, or by Private Charter, depending on your preference and group size.

If you are interested in heading down to King Island for some amazing golf give us a call to see how we can help.

We have arrangements in place with all of the courses on King Island as well as a variety of accommodation options which enables us to charge no more than what it would cost you to organise the trip yourself, only we are a one stop shop that can advise on all the options, as well as taking all the hassle out of dealing with different airlines, hotels, golf courses, transfer companies etc.

So, if you want to take all the stress out of organising your next golf trip, let us do the hard yards for you while also saving you time and money. Your only job be needs to be finding the right mates to travel with! 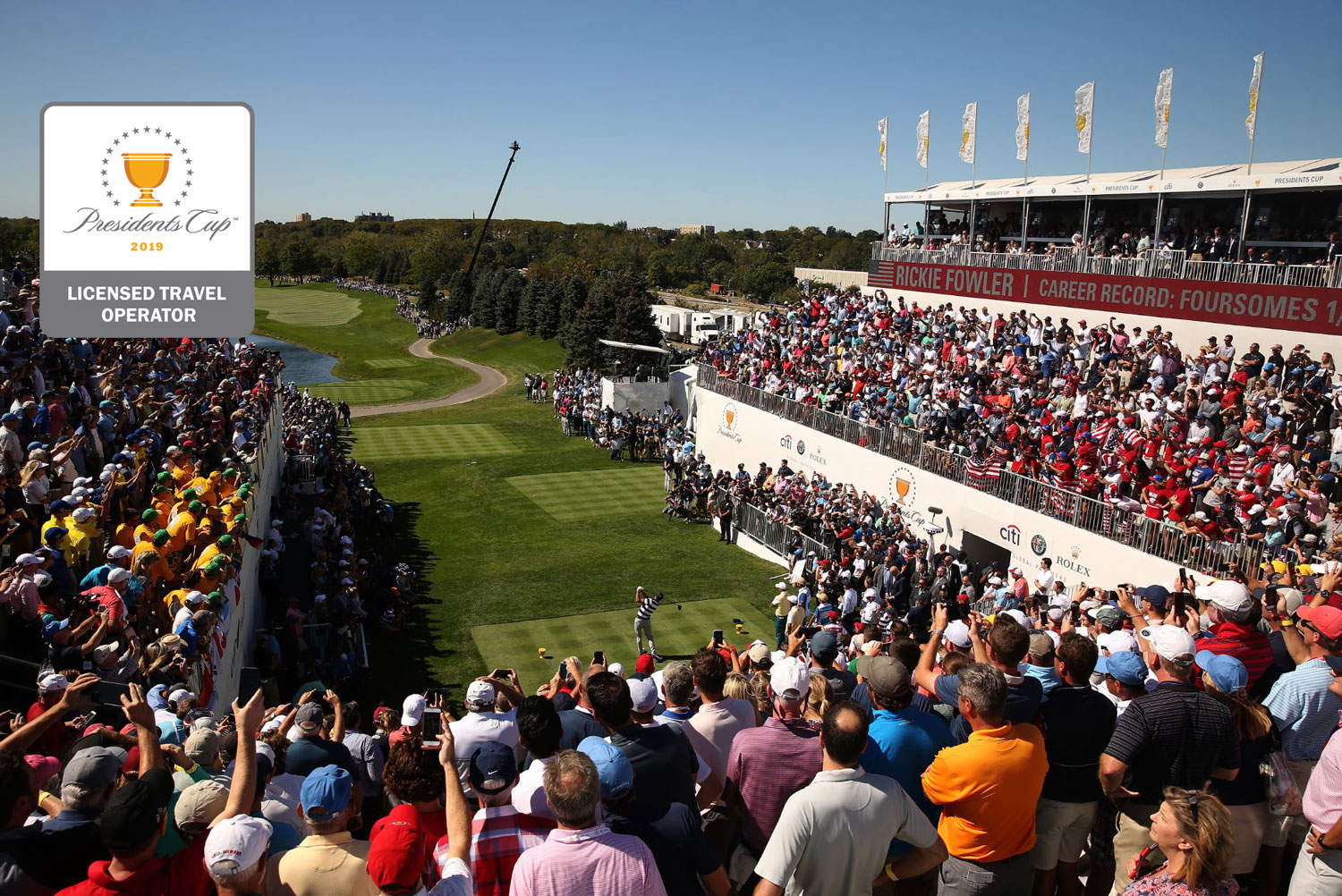 Brought to you by Rod Morri for The Golf Travel Agency

A best of the year T3 finish in South Africa has seen Jason Scrivener bolt into the field for the season ending DP World Tour Championship in Dubai this week.

The West Australian will take his place alongside veteran Scott Hend, the pair

the only two Australians to qualify for the 50-man field.

Scrivener started the week at Sun City outside the top 50 qualifiers but rounds of 69-70-71-70 saw him finish four shots out of a play-off between eventual winner Tommy Fleetwood and Sweden’s Marcus Kinhult and jump 24 places in the Race to Dubai standings.

Boasting a US$8 million purse, the tournament is the most lucrative on the European Tour and this will be Scrivener’s first appearance. Hend is teeing up for the fourth time after missing out last year.

Scrivener is 35th in the overall standings while Hend grabbed the last available spot by finishing 50th.

It’s the biggest first place cheque in women’s golf and four Australians will have their chance at the US$1.5 million windfall when the final event of the LPGA season gets underway this week.

Minjee Lee, Hannah Green, Su Oh and Katherine Kirk are among the top 60 performers on the LPGA this season who have earned a place in the field at the CME Group Tour Championship in Florida.

Lee is among the most consistent players on the LPGA Tour and her results in 2019 confirm she is a winning prospect almost every time she tees up. Five top five finishes, including a fourth career title in California in April, and 20 cuts made in 22 starts means she will start among the favourites at Tiburon Golf Club this week. While Lee is a constant threat and clearly Australia’s best player at the moment, the one item currently lacking from her impressive resume is a major title.

everybody in the golf world, including herself, with victory at the Women’s PGA Championship in June. The win was Green’s first on the LPGA and to prove it was no fluke she backed up with a second title at the Portland Classic in September. Green comes to Florida off a T10 finish last start in Japan and while she won’t be among the favourites for most analysts, she has proved she is capable of surprising at any level.

There was a time not so long ago when the three most dominant players in amateur women’s golf were Lydia Ko, Minjee Lee and Su Oh. While Ko and Lee made the transition to the professional ranks look easy, it has taken Oh a while to find her feet. A change of coach mid-year (following a run of six consecutive missed cuts) has paid dividends and with just two weekends off in 16 events since May, Oh will bring confidence to the tee Thursday.

The final Australian to make the field is Queensland veteran Katherine Kirk who took the 58th spot in the 60-player field. Recent form suggests her game isn’t quite where she wants it, however golfers at this level can turn things around with one ‘aha’ moment on the driving range and Kirk will be motivated for a big finish to the year.

The Aussie Summer of Golf

As golf fans we spend most of the year tracking the fortunes of our favourite players overseas. But for a few glorious months each year we get the chance to see them up close and personal and it’s an opportunity we should all grab.

Aside from the sheer pleasure of seeing players the calibre of Adam Scott and Jason Day up close, making the effort to go to a tournament helps attract and keep sponsors, critical to the future of professional golf in this country.

The ‘Australian Swing’ starts next week with the NSW Open at the Twin Creeks course in Sydney and is followed by the Australian Open at The Australian Golf Club, The Presidents Cup at Royal Melbourne and the PGA Championship at Royal Pines on the Gold Coast.

Pro-Ams in NSW (where some surprisingly high-profile players turn up) followed by a couple of significant events.

The first week of February sees the unique Vic Open played at 13th Beach featuring a men’s and women’s event played concurrently – and for equal prizemoney. With sanctioning from both the LPGA and European Tours it is an important tournament on the Australian calendar and with its lack of gallery ropes might be the best spectating experience in the world.

The following week the Tour moves to Adelaide for the Australian Women’s Open which has proved a big success in the otherwise golf starved market.

Rounding out the schedule are two Ladies European Tour events, The Bonville Ladies Classic and the NSW Women’s Open. The first is staged at one of Australia’s most popular resort courses near Coffs Harbour on the NSW North Coast, the Bonville layout often drawing comparisons to Augusta.

Meanwhile, the second event will see England’s Meg Maclaren take aim at a trifecta after winning the tournament each of the last two years. Being played at Dubbo is an interesting innovation and one to be applauded. The town is best known for being home to the Western Plains Zoo but boasts a 27-hole golf facility which will provide a stern test for the field.

Under The Radar – The Presidents Cup’s Lesser Known Team Members

there are two of his team members who will be of particular interest to golf fans.

Unlike most on the home side, Korea’s Sungjae Im and Chile’s Joaqin Niemann are virtual unknowns outside the PGA Tour, but while fans may not instantly recognise them, they will likely give plenty to cheer for.

Im, a two-time winner on the secondary Korn Ferry Tour in 2018, was the PGA Tour Rookie of the Year for the season just gone and many in the know have tipped him as a player to watch. While yet to taste victory at the top level the 21-year-old proved he has the game to mix it with the best by qualifying for the Tour Championship in his rookie season, a feat achieved only 12 times previously.

Like Im, Joaqin Niemann has been a revelation since joining the PGA Tour following the 2018 Masters. A former World Number One ranked amateur, Niemann earned a start at Augusta courtesy of victory in the 2018 Latin America Amateur Championship then turned professional shortly after the year’s first major.

Many have followed a similar path but few with such immediate success, Niemann soon parlaying seven sponsors invitations into Special Temporary Membership of the Tour thus avoiding Tour School and other avenues of qualification. He cemented his place as a full Member with an impressive maiden victory in September and will unquestionably be a player to watch at Royal Melbourne.

Recently commissioned by St Andrews Beach Golf Club on the Mornington Peninsula, Caddie Mag’s Editor in Chief, Will Watts, captured a stunning series of images and drone footage for the highly regarded course.

Caddie Mag is a boutique publication that captures rare and authentic stories for, from and surrounding the world of golf.

Have a look at this amazing fly-over of the Mornington Peninsula’s St Andrews Beach Golf Course:

Click here for packages to the Mornington Peninsula, and for more information on Caddie Magazine, go to: www.caddiemag.com